Stories from the frontline

How we help people successfully deal with life's problems 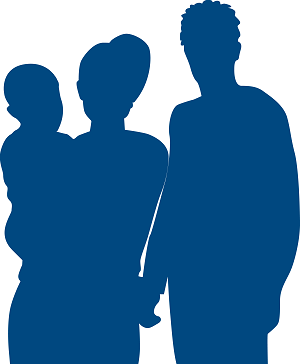 We aren’t driven by a one size fits all approach.

We know people need different types of support at various times in their life.

One of our greatest strengths as a service is the flexibility to deal with most issues that people come to us with and we tailor our advice to each person’s needs.

We aim to solve problems, reduce their impact on individuals’ lives, and improve people’s circumstances.

We help around 350 people each week, below are just some of their stories...

Lisa* sought our help to deal with debts she was worried she would never be able to repay.

Lisa is disabled and lives with her adult son, who is also disabled, in a housing association home. She is in receipt of Employment and Support Allowance (ESA) and Disability Living Allowance (DLA). Lisa has physical and mental health issues.

Lisa had an overdraft facility of £2,500 with her bank. She was within her overdraft limit but concerned because the balance kept increasing due to daily overdraft fees that she had to pay. These had escalated the debt and Lisa was worried that she would never pay off the debt.

Lisa spoke to her bank and they agreed to stop adding charges - the debt was then around £1,750. The bank also sent her a medical form and offered to reduce her debt by £100. Lisa thought she should get advice first, so she rejected this offer and contacted us for debt advice. 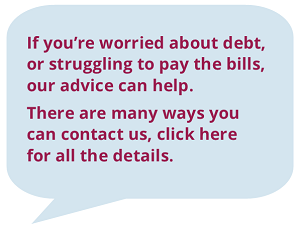 Our adviser wrote to the bank on Lisa’s behalf, pointing out that they had allowed the debt to escalate when her only income was benefits; and medical evidence was sent along with a request to write off the debt.

The bank agreed to credit Lisa’s account with £1,500 to cover the overdraft fees, plus £25 for some additional fees and £20 for the medical evidence from the doctor.

The bank also agreed to cancel her overdraft facility and put a restriction on the account that will stop her applying for similar facilities in the next 6 months. At the end of our interaction her account was in credit just over £290.

Lisa was delighted with the outcome and can now move forward without worrying about being in debt.

Helen* had applied for Personal Independence Payments (PIP) herself but had been turned down.

Helen then turned to our Carers Project for help with her PIP mandatory consideration.

We helped Helen with her case and the project caseworker also attended her appeal hearing as an observer.

The appeal was successful and Helen was awarded PIP at the standard rate for both daily living and mobility.

She will now received almost £320 every 4 weeks.

The claim was also backdated, which meant Helen also received a backdated payment of £7,400.

Liam* had been due to start full time employment but this had been delayed because of mental health issues.

The delay meant Liam was struggling to manage on an extremely restricted income and had started falling behind with priority and non-priority payments.

We helped to negotiate affordable payments to all creditors and Liam  was back on track to his clear debts within a few weeks.

Being back in control of his financial situation has allowed Liam to focus on completing his mental health counselling sessions. He is then intending to take up the pre-existing offer of employment.

Sam is a single parent who works 16 hours per week.

She came to us for help with rent arrears, Council Tax arrears and Wessex Water arrears.

She wasn't opening her post and was referred by her housing association tenancy sustainment team.

We conducted a debt appointment, completed a financial statement, worked out what Sam could afford to pay towards her debts, telephoned the Council and arranged a repayment plan for Council Tax arrears, completed a Wessex Water form and agreed what she would offer the housing association towards her arrears.

We rang the housing association to ensure the offer would be acceptable, but were told they had already applied to court for the eviction warrant.
When the warrant for eviction arrived we talked through the process with Sam - enabling her to download the form, vary it, and complete it using the financial statement and budget sheet prepared earlier.

The eviction was suspended on the terms offered, and she is now paying her Council Tax, as agreed and has been accepted onto a Wessex Water scheme.

The best thing however, is Sam says she can see light at the end of the tunnel now – so she opens all her post when it arrives and deals with it immediately.

Ian was referred to us as a Jobseeker on Universal Credit (UC). His mental health had deteriorated and he had seriously contemplated suicide, and was awaiting a diagnosis of Asperger's.

He was expected to travel a significant distance, using public transport, each fortnight to visit the Job Centre.

Ian’s total Universal Credit payments were just under £767 per calendar month (pcm), including housing element. He was having deductions of £35pcm for an advance payment of UC, leaving him with a net income of £732. His rent of £695pcm took the vast majority of this, and he was tied into this private tenancy agreement for several more months. Rent arrears would have detrimentally impacted on the likelihood of being housed via Homes4wiltshire. He had therefore been maintaining rent payments and so had only £37pcm to live on.

We assisted him to request that his claimant commitment be amended and supported him at the appointment with the Job Centre.

Jess is a young mother, with two children under five and a partner.

She has been struggling with mounting non priority debt for several years and this was affecting her relationship and health.

The Caseworker on our GP Surgeries project helped Jess to apply for a Debt Relief Order. This has now been approved and her debts of just over £3,000 will be written off.

This will enable Jess and her family to have a fresh start.

Alan was first referred to the Macmillan benefits service in 2015, having been diagnosed with prostate and bone cancer. We helped with applications for Personal Independence Payments and a Blue Badge.

Alan and his wife, Sue were both employed by a local family as gardener and housekeeper and as part of this tied accommodation was provided along with a small income.

Due to the deterioration in Alan’s condition during 2016 it was clear that he would be unable to fulfil his duties as a gardener. The couple needed to find alternative accommodation and make the transition from earned ncome to benefit related support to enable Sue to provide full time care for her husband.

The local housing department located a suitable property and an application for Employment & Support Allowance was submitted for Alan, and along with Carer’s Allowance for Sue, applications were also made for Housing Benefit and Council tax Reduction. We also identified that Alan was in receipt of a small pension from a large transport organisation. Having discovered that a benevolent fund was in place a case was put forward for financial help and a grant for over £1000 was awarded.

Unfortunately shortly after occupying the property Alan passed away, so help with Bereavement benefits was given along with an application for a Funeral Grant. The benevolent fund also gave Sue the use of a holiday property during 2017 at no cost.

Although some of the benefits were not paid for a full twelve months the annualised figure for all benefits located and accessed totals over £33,000, not including the cost of the holiday property.

We undertook a home visit to Magda to support her completion of a Personal Independence Payment (PIP) form.

Previously, Magda was on Disability Living Allowance (DLA), had a Motability car and an award of middle rate care.

Living in a relatively remote part of the county, with little in terms of public transport, retaining the car was essential to avoid being isolated.
The PIP assessment was carried out at Magda’s home and she was awarded enhanced mobility, so was able to keep the car, and standard daily living, so kept the same rate of benefit at £55 per week.

Magda was absolutely delighted, and more than a little relieved, saying she doesn’t think she would have been successful without our help.

In particular, she felt she would have been much more on edge had we not been able to explain what happens at the assessment and how the assessors need to be professional in their approach.

Steve came to us in great distress, as his Employment Support Allowance (ESA) had stopped and he had been deemed capable of working.

He has severe osteoporosis as well as curvature of the spine. We talked through the fact that he would need to report a change in his circumstances to begin a new claim.

We asked him if he had included his mental health issue on the form (he suffers from psychosis). He said that he had been too ashamed to admit that he has hallucinations and hears voices. Also, he wasn’t aware that these would also be considered for his ESA claim.

We were able to constructively explore the relevant factors around Steve’s mental health issues.

With the support of the project his ESA is now back in place.

We use cookies on our website. Some of them are essential for the operation of the site, while others help us to improve this site and the user experience (tracking cookies). You can decide for yourself whether you want to allow cookies or not. Please note that if you reject them, you may not be able to use all the functionalities of the site.