Citizens Advice Wiltshire has helped almost 18,000 people during the pandemic

The coronavirus pandemic has caused huge upheaval to our daily lives. Our health, work, education and social lives have all been affected in ways we would not have thought possible as we entered 2020.

People have been affected in different ways and the Citizens Advice service has been profoundly affected too. When the pandemic hit last year we quickly adapted to help more people via the phone, email and webchat.

Over the past year we've helped local people to deal with almost 46,000 problems, with Benefits, Employment and Managing finances being the top pandemic issues. 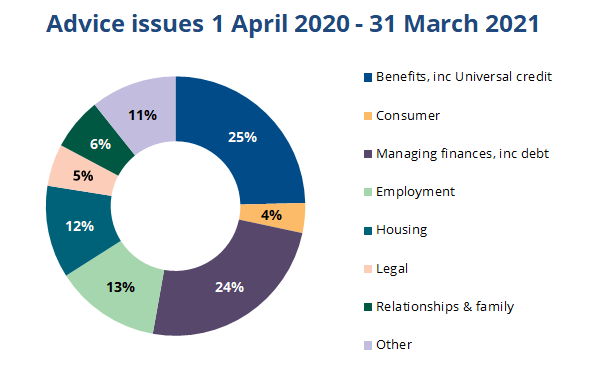 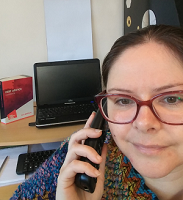 Around 150 staff and volunteers have been working from their living rooms, dining tables and kitchens to make sure people could still access much-needed help.

An adviser, from Citizens Advice Wiltshire said: “We’ve all been on a rollercoaster of change throughout this pandemic.

“We’ve spoken to people who’ve never used Citizens Advice before, have never claimed benefits before and have had a steady income for years, if not decades. Suddenly, they feel if the rug has been pulled from under them and they don’t know what to do.

“We’re here to listen, support and then help them find a way forward, and it’s a reward to hear the relief in their voices at the end of the call.”

Prior to the pandemic Mike was a self-employed gardener, working around 16 hours a week. He has some health issues, so to help top up his income he was also in receipt of working tax credits with a disability element, and housing benefit. 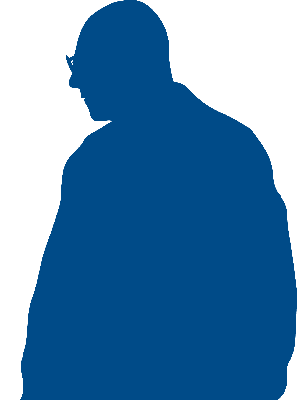 When his gardening work stopped because of the lockdown, Mike made a claim for Universal credit (UC). But the change from tax credits to UC, including the 5-week waiting period for his first payment, left him in a difficult financial situation and was causing him a great deal of stress. Mike started selling his personal possessions and called us for a food parcel.

As well as helping Mike get a food parcel, advisers also helped Mike to navigate his UC claim. This included advice about how to get an advance payment on his first Universal credit payment; and how to tell his work coach about his medical condition.

We also discussed with Mike other options to help improve his financial situation and how he could find out about, and apply for, other support that may be available to him, including getting council tax reduction, and a grant through the Self-Employed Income Support scheme.

After speaking with us Mike said he was reassured by the information he received.

What we’ve seen in Wiltshire has been echoed by Citizens Advice up and down the country, with 18 people being helped every minute.

18 people helped every minute: What Citizens Advice data shows about the year everything changed

While employment advice enquiries shot up in the initial stages of the pandemic, we saw a significant reduction in the number of people coming to us for advice about debt, as payment holidays and other protections kicked in. That changed in June, when the numbers started to steadily rise in the need for advice, food bank referrals and charitable grants.

As the one-year marker since lockdown began passed Citizens Advice warned that debt is the looming problem of the pandemic.

The 12 months of pandemic data from Citizens Advice maps the waves of demand for different types of advice during its busiest ever year (1). In this time, there have been more than 60 million views of its self-help advice pages, and its frontline advisers have given one-to-one advice to two million people - 18 people every minute.

Fuel debts and CCJs. The number of people wanting debt advice dropped sharply during the first lockdown. Emergency protections meant they could postpone seeking help while they tackled more immediate day-to-day issues. Since June, the numbers have been steadily increasing. There have been steeper rises in the need for charitable support, help with fuel debts and searches around County Court Judgements (see graphs one and two). Without further interventions, Citizens Advice expects debt issues to increase. 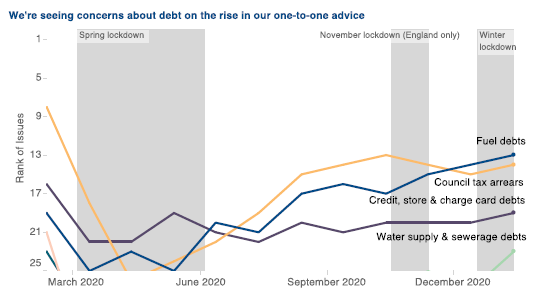 Wills. In a stark reminder of the human cost of this pandemic, the charity also saw a big rise in views of its web pages on wills and deaths. An acute increase during the first wave of the pandemic was followed by an even greater increase during the winter lockdown, mirroring the higher death toll of the second wave.

Redundancy. In terms of redundancy, Citizens Advice saw a staggering increase in the need for help throughout the first lockdown, but this nosedived as the initial extension to the furlough scheme extension was mooted (see graph three). 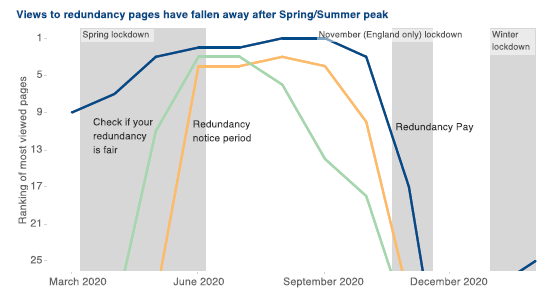 People’s questions about the furlough scheme also changed. From March to May 2020, they were largely around working and being made redundant while on furlough, but as people became used to the scheme the questions changed to getting a second job. As the third lockdown and home-schooling took hold, the focus was instead on if people could ask to be furloughed (see graph four).

Universal Credit. Demand for the charity’s Help to Claim Universal Credit service mirrored the initial surge in applications for the benefit, which flattened from May onwards. During the past 12 months, Citizens Advice has seen a change in the people seeking support with applications, with women and under 35s making up a bigger proportion, but a fall in the proportion of disabled people.

Citizens Advice, which was formed in response to the outbreak of World War Two, was already offering remote advice before the pandemic, and so was well-placed to adapt as the crisis took hold. In 2020 it helped 77% more people by phone, 83% more by webchat, and 41% more by email compared to the previous year.

Our data shines a light on how people’s worries and fears have changed throughout this pandemic. It has given us early warnings of the problems ahead, and that alarm is now signalling the return of debt problems as people deal with the fallout of job losses, lower wages and less stability.

Behind the numbers are the individuals who have been buffeted by a wave of problems triggered by the pandemic. Our frontline advisers will continue to be there to support them, but as a nation we must ensure no-one is left behind on the road to recovery.

The stories behind the data: ‘I can't always afford food - I'm worried about how I’ll survive’

Lisa, 43, from Surrey, has worked in the travel industry for most of her life, but in March she was told to shield and furloughed. In October, she was made redundant when her team was cut from nearly 50 people to five.

She said: “For the first time in my life I had to apply for benefits. My Universal Credit and Jobseekers’ Allowance doesn't cover all my bills. There's always something that I’m not able to pay in full. I'm now in council tax arrears and I'm behind on a loan.

“I can't always afford food and I'm really worried about how I am going to survive.

“Citizens Advice has helped me access energy and food vouchers and are helping me with my debts.

“I apply for jobs everyday but for every job there's about 100 people applying. It's such a difficult time and I just hope that I can get a job and get my life back on track.”

You can find out more about in the full Life in Lockdown report, available to download for free below:

We use cookies on our website. Some of them are essential for the operation of the site, while others help us to improve this site and the user experience (tracking cookies). You can decide for yourself whether you want to allow cookies or not. Please note that if you reject them, you may not be able to use all the functionalities of the site.